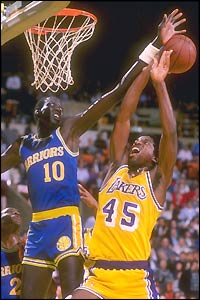 Manute Bol the NBA’s tallest player at 7 feet 7 inches has passed away today on June 19th at the age of 47.  He played with several teams including: Philadelphia 76ers, Washington Bullets, and the Golden State Warriors to name a few teams that he was actually noted as playing for and he may have not been to the magnitude of Yao Ming but he was a well known center in the NBA and we as humans have a hard time excepting death especially when its not highly anticipated.  He was struggling with a kidney ailment and a skin disease and now one of the more notable players in the NBA has passed on and truly will be missed reguardless if he was a Huge impact in the game or not!!!!  REST IN PEACE MANUTE!!!!!!!!

Ty Powell aka TP Tymeless is currently living in Stamford, Connecticut. Tymeless is another die hard fan but of the Lions, Thunder, Twins, Hoyas, and The U. Ty grew up in Stamford and went to college in Rhode Island. He is a founding member of the Sport City Chefs network and can be heard on 8 regular shows. OWWWWWW!